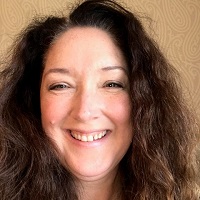 Spelling in English is difficult. To many it seems that English is in fact deliberately difficult. A historical look at how English developed explains a lot, but it doesn’t help students get a handle on any kind of rule that will help explain why many words don’t look the way they ought to sound. This poses an additional challenge to the dyslexic students in our classes. How can we help students learn spelling?

It may seem counterintuitive to link the pronunciation of the word to the spelling given that English is not known to be a phonetic language, but in time students will have a better guessing ability of how words might be spelled if they learn to hear and see the word. Take English place names that end in –cester for example: Bicester, Gloucester, Leicester, Worcester, (Let’s ignore the odd one out: Cirencester). To look at these place names you would say them /sestɜː/, but the pronunciation is /stə/. When students see and hear the words, they begin to understand that the pronunciation /stə/ is written cester.

In class, make sure you introduce the pronunciation to written words. Out of class, encourage students to use the audio portion of an online dictionary when learning words. You will see that in many of the activities below, pronunciation and spelling are linked.

2 Separate the root from the affixes

Many students are daunted when faced with a long word to learn, so break the word into more manageable chunks. One way to do this is to look for the root, suffixes and prefixes: a word such as unimaginable looks rather daunting, but if we break it down into its parts – un-imagine- able then it’s much easier to spell, and students need only remember to drop the e from imagine.

3 Break down longer words into syllables

Following on from 2, you can also break longer words up into syllables: syllables are a smaller chunk to manage and students learning multi-syllable words can find it helpful to break the word down and sound out the smaller parts. Sometimes the syllables reveal something about the word that saying the whole word doesn’t. An example is the word interesting /ˈɪntrestɪŋ/ which is pronounced with 3 syllables. When we write out the syllables, we get in-ter-est-ing which helps remember to include that silent e in the second syllable.

5 Make a record of words in notebooks

There are lots of patterns that students can group together in their notebooks. This can be an ongoing thing that students add to throughout the year as they learn new words (as they come up) or go through your coursebook and find the patterns to create a list at the beginning of term. 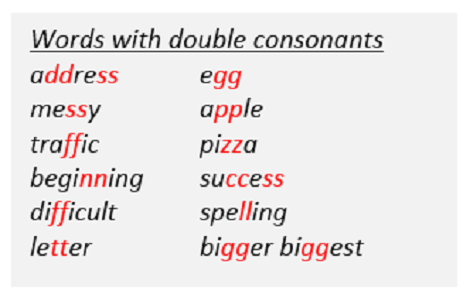 You could also use this same technique on posters which can be put around the room as peripheral learning devices.

As an extension to recording words in patterns in their notebooks (tip 5), flash cards can also be used to help spelling. One way is to write the word with the pattern in a different colour. The example cards below put pronunciation after the ea words to help students remember. 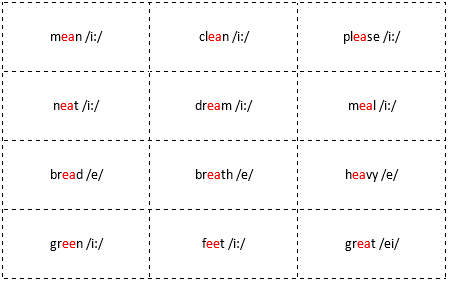 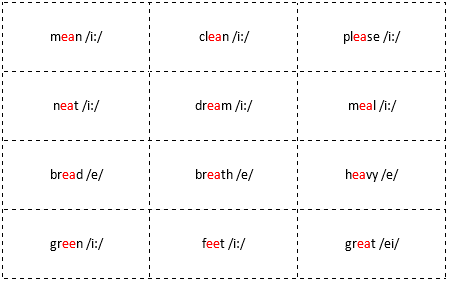 On the other side of the card, write the word with blanks: 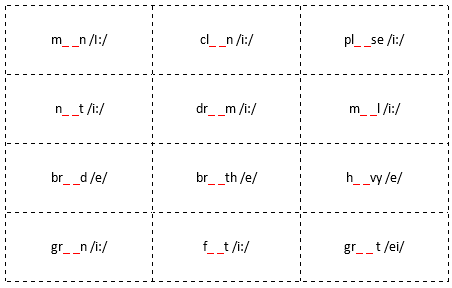 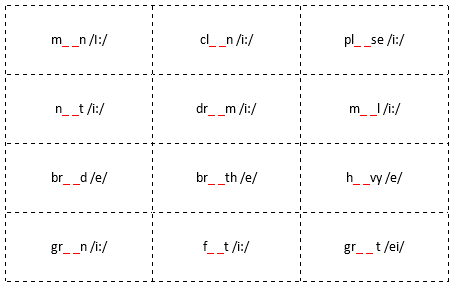 Working on the principle of keeping records of words in patterns above, you can also group words according to pronunciation. The chart below shows patterns of words grouped by the /iː/ sound. 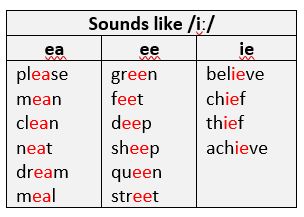 8 Learn some rules and exceptions

English spelling does have rules, it’s just that there are many, they are complicated, and there are many exceptions. However, there are a few rules that can be helpful to students as long as they understand that none of the rules is hard and fast. They can make a note of exceptions, too.

• i before e except after c: This rule applies when the word has an /iː/sound. Example words include: belief, chief, piece, thief, niece. After c examples include: ceiling, receipt, receive, perceive. Exceptions include: seize, weird, protein, science, ancient. Words that break the rule often don’t have the /i:/ sound: foreign, height, neighbour, weight.

Once students have seen how this works, they can apply it to a number of words: hate, ate, smile, while, knife, tone, phone, rude, etc. Exceptions include: give and live (v). Note the pattern of vowel + consonant + e.

• when these go walking, the first does the talking: This rule is similar to the one above in that the first letter in the pair says its ‘name’.
ea (eat, meat)
ay (say, play)
ai (rain, train)
ee (see, green)

There are many more rules that are helpful for students to learn. It’s helpful to teach the rule as and when it is necessary; for example, when teaching how to make the plural, change the y to i and add –es is a useful rule. When encountering compound words, teach the rules of when to use hyphens.

Sometimes mnemonic tricks can make the spelling of a word memorable. For example, students can find the word in the word: In the word believe is the word lie. When you lie, I don’t believe you. And here are some ideas for distinguishing between homophones:
• stationary/ stationery: It’s airy when I’m stationary; I need stationery for my letter.
• principal/ principle: The principal is my pal.
• hear/ here – there is an ear in hear – I hear with my ear
• knight/ night – notice that the K in knight looks a bit like a stick figure of a person in profile. Draw a circle for a head – it’s a knight ready to fight tonight.

While reading on its own doesn’t help spelling, especially of words that are unknown, seeing known words in context will help students internalise when a word looks ‘right’. Reading and listening is a multi-sensory way for students to internalise spelling – they see and hear the word. As they read or listen and read, help them notice specific words – words with tricky spellings or words they commonly misspell.


Stacey H. Hughes is a freelance teacher trainer, educational materials writer and teacher. She has an MA in Applied Linguistics and TESOL and has taught in Poland, Italy, the UK and the US. Stacey gives talks and workshops around the world – both face-to-face and via webinar.