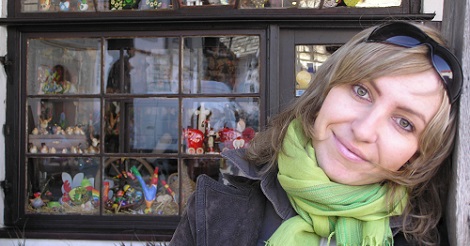 Using technology in the EFL classroom has become widespread in today’s educational environment. Belonging to a fast-paced generation, students can become dependent on electronic devices, such as tablets, mobile phones or digital cameras. So why not make use of them in the classroom?

A good way to motivate your students to learn a foreign language is to involve them in video projects. These not only foster their critical thinking and enhance their language skills but also increase students’ efficacy. After a 2-year-long evaluation of using video projects with my secondary school students, I’ve noticed that they have a great influence on students’ grades, motivation and engagement in problem solving tasks.

Here are my 10 ideas for how you can use video cameras with your students.

You can start your class with a video on addictions (or any other topic you choose).
A good idea is to choose videos available online which depict problems of addictions.
Students watch the video and answer the following questions:
- Who is involved?
- What is the problem in the video?
- Do you know anybody who has experienced the problem?
- What might be the causes of addictions? etc.
After watching the video divide students into groups of 4-5 and ask them to prepare posters illustrating the problem and giving a solution. Next all the groups present their posters and students vote for the best one. You can record your students giving presentations of their posters and later on watch the video together and give feedback. As homework ask students to prepare a scenario of a short spot (3-4 minutes) presenting the topic discussed during your class. Give them 2 weeks to prepare. Help them with the plot and language (e.g. set up a Facebook or Edmodo group).

You can see my students’ video here.

The video was awarded 3rd prize in the video contest ‘Say NO to drugs’ organised by the local authorities. 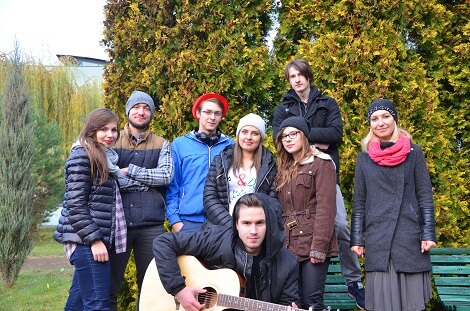 If you want to personalise your classroom and teach your students 21st century skills such as critical thinking, collaboration and creativity assigning a ‘music video project’ is the solution. Divide your students into groups and ask them to prepare a scenario for the video entitled: ‘Band interview’. A music project can have a direct connection to your students’ interests outside school. Introduce some funny objects that your students can use in their video, like a bucket, a pot or a broom which can serve as musical instruments or whatever they think of. My students’ ideas far surpassed my expectations.

You can see my students’ video ‘Band interview’ here.

Bring a story/poem to your classroom and read it to your students. Help students with any new vocabulary from the poem. Next divide your students into groups of 4-5 and ask them to think about the scenario of the video which is based on the poem. They are given 2 weeks to record a video illustrating the meaning of the poem. Encourage them to use costumes and realia. Students can also include a brief comment at the end of the video telling others what they have learnt from the experience.

Ask students at the end of a school year about the topics they liked the most from their coursebook. They can choose one topic or several.
Students work in small groups and think about a scenario of a short video based upon these topics - ‘A coursebook adventure’. Before their videos are produced, students can watch other students’ videos as an example (if you do not have any videos, you can use mine).
While working on the project, encourage your students to communicate and exchange their ideas on a class Facebook or Edmodo group. Monitor students’ work and give them any help needed in preparations for the video projects.

You can see my students’ video on a ‘coursebook adventure’ here.
The video was awarded 1st prize in the international ‘Headway Scholarship’ competition.

If you want your students to respond with their senses, bring a magic box to your classroom.
Put different objects into a bag or a box. They can be connected with the previous lesson, for example holidays, food etc. You can also choose noise-making items like a keyring or aromatic things like peppermint. Students close their eyes and go through every single item in the magic box. Next they work in small groups and discuss the objects. Students develop a story with the items from the box. You can play some background music (e.g. jazz or blues) to make them enjoy the activity more. Then open the magic box and show the items one by one to your students. Give them 20-30 minutes to prepare their stories and then record their presentations. Involving students in such activities allow them to spark their imagination and activate their emotional states.

You can see my students telling a story here. 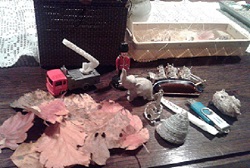 A picture of the items from my Magic Box

Start your class playing different film soundtracks. You can choose three different genres of music/film. Ask your students to listen to them and imagine the type of films they are from. Students are to write what they have imagined and share it with their partner. Next you can watch the original scenes from the movies.

Students work in small groups, choose a soundtrack and think about a plot of the video. They prepare the dialogues between the characters to match the type of music they have chosen. You can use your mobile camera or a digital camera to record their role-playing and later on watch the videos together to give them feedback and simply make them enjoy seeing their final products.

Bring some objects to the classroom and ask your students to work in pairs or small groups. Students choose one object and prepare a TV commercial of it. Record your students videos which can serve later on as a resource for other students to use in the future.

You can see my students’ video here.

You can immerse your students in another culture by connecting with a school from a different country on skype. Students ask YES/NO questions in order to guess where the other students come from. When they guess the name of the country, they can exchange their ideas, talk about their hobbies, interests, school life, cultural differences etc. You can use a digital camera or your mobile to record them talking with other students. During the next class you can watch the video with your students to provide feedback and work on possible language problems that occurred during speaking. 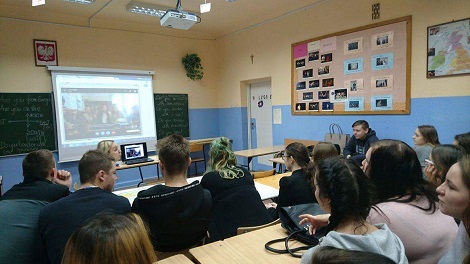 If you want your students to stop being a class of clock-watchers waiting imaptiently for the end of the class then make them act spontaneously and improvise. You can give each pair a task and ask them to react spontaneously and use their imaginations to act out a dialogue.
Such activities expand creativity as well as boost communication skills.
Here are some examples of tasks:
- two friends who haven’t seen each other for 5 years meet at the concert
- a girl/boy meets her ex-boyfriend/ex-girlfriend in the pub etc.
You can record your students performing the dialogues and later on watch the videos together.

As a start to the lesson you can engage your students by playing for example ‘Romeo and Juliet’ movie with sound only. Students listen to it and imagine who is involved. Stop the video at some point and ask students to work in pairs to share their ideas. Next ask students to listen to the next part of the film but this time they are to predict what happens next. As a follow up set up a video project, for instance ‘A parody of Romeo and Juliet’ and give your students some time to prepare it. Engaging students in video production not only fosters their problem-solving skills but also gives them the opportunity to collaborate with their peers.

You can watch my students’ video here.


The most important thing: PRAISE YOUR STUDENTS on their hard work!

Magda Dygala works at the Kazimierz Pulaski University of Technology and Humanities in Radom, Poland and is also a teacher of English at the ZSO 7 Secondary School. She has written several other ETpedia blogs: take a look at '10 ways to teach English through music' and '10 ways to teach and revise vocabulary'.